Sammy proudly closed out the 4th Annual Faena Jazz Series on June 15th with a smashingly successful show. Featuring Grammy winning pianist Gonzalo Rubalcaba and Latin Grammy and Grammy winner Aymee Nuviola, the concert previewed songs from Sammy’s upcoming album, “Searching For A Memory”, a reimagining of his late father’s romantic ballads through a Latin Jazz lense. Audience members were dazzled by a glorious celebration of Latin Jazz as well as a comprehensive connection cultivated through music. The show, produced by Grammy nominated Rachel Faro, was a sold-out triumph and a thrilling reminder of the unity music offers. 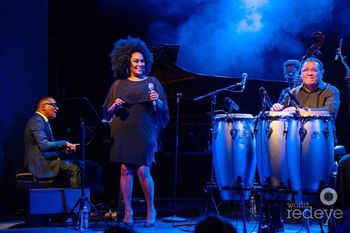 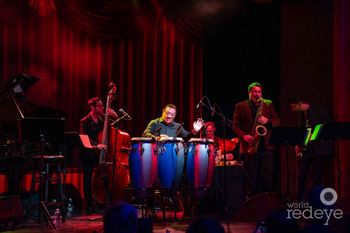 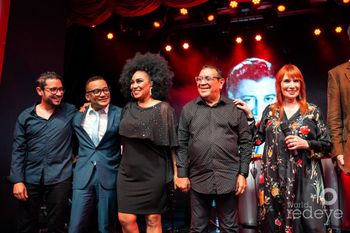 click here to view more photos from the show

Sammy is extremely honored to announce that his new album project "Searching For A Memory" has received a $40,000 Creative Residency Grant for a recording and video of the music of Sammy's father, the romantic singer Charlie Figueroa.  The story behind the project, which was originally envisioned by his producer and wife, Rachel Faro, is to make peace with a father he never knew, (Charlie died at the age of 27) but from whom he inherited his talent.  Musically, Sammy's vision is to present the old romantic ballads in the form of modern Latin jazz arrangements.  To Sammy's great excitement and gratification, Cuban pianist Gonzalo Rubalcaba has agreed to play on the album, along with trumpetist John DaVersa and fellow Puerto Rican sax player Miguel Zenon.  Recording will begin in 2022 with a release projected for May 2022.

Only on Amazon Prime!

Sammy Figueroa's latest show on Mixcloud Select is now live!   At this turbulent time music can heal, inspire and comment.  Sammy's put together a fantastic collection that includes music that spans from Ray Charles and Stevie Wonder to David Bowie plus emerging artists like Jarrod Lawson and the Trills.  Subscribe to Social Music on Mixcloud Select now!  Hear great music while supporting the creators of the music!

"Soul/jazz vocalist Jarrod Lawson unites with legendary percussionist Sammy Figueroa on his new album, Be the Change. Due out on October 30 via Dome Records, it presents eleven originals that aim to speak to the hearts of the people and reflect the contemporary social climate. The title track is inspired by Mahatama Gandhi’s famous words that “You must be the change you wish to see in the world.” “My intent with this lyric,” explains Lawson, “is to offer a glimpse of a future where social and environmental irresponsibility dissolves to make way for accountability and foresight. A world where the concerns of future generations become the concerns of this and every generation.”  JAZZIZ MAGAZINE Sept 2020

CUARENTENA: At Home With The Family

Sammy is proud to be part of a very special band assembled for this album.   Multiple Grammy winner trumpet-player, educator and producer John DaVersa invited Sammy, pianist Gonzalo Rubalcaba, drummer Dafnis Prieto and bassist Carlo DaRosa to pay tribute to their own musical roots by honoring their parents, many of whom were also musicians.  Originally entitled Bolero Familia when the COVID pandemic hit and everyone was confined to their homes DaVersa was further inspired to dedicate the album to the idea of family as sanctuary and inspiration.  "El Ultimo Suspiro", a song made popular by Sammy's father, Charlie Figueroa, features Sammy's percussion is featured on the album.

Sammy proudly closed out the 4th Annual Faena Jazz Series on June 15th with a smashingly successful show. Featuring Grammy-winning pianist Gonzalo Rubalcaba and Latin Grammy winner Aymee Nuviola, the concert previewed songs from Sammy’s upcoming album, “Searching For A Memory”, a reimagining of his late father’s romantic ballads through a Latin Jazz lense. Audience members were dazzled by a glorious celebration of Latin Jazz as well as a comprehensive connection cultivated through music. The show, produced by Sammy’s wife Rachel Faro, was a sold-out triumph and a thrilling reminder of the rehabilitation music offers us all.

Sammy is proud to have be one of MIXCLOUD internet radio's group of SELECT hosts.  His show, SOCIAL MUSIC with SAMMY FIGUEROA is now available for subscribers.  For only $2.99 you can access a special group of exclusive shows, be the first to hear new shows and best of all, 60% of subscription revenues go to the musicians and writers who create the music.  Sammy's kicking it off this week with "THE DEMOCRACY SHOW".  If you subscribe you can hear this very special show all week, an inspired and dedicated mix of songs by artists from Ray Charles to Marvin Gaye to Janelle Monae to Bob Dylan to Childish Gambino.

SAMMY JOINS REGINALD POLICARD IN A TOUR OF CUBA & HAITI

Sammy has always had a very strong relationship to the island of Cuba, its musicians and its culture.  Moreover, he has always felt that the drummers of Haiti are the most complex and sophisticated of all those in the African diaspora.  Now he is thrilled to join his friend, the Haitian musician Reginald Policard in a group called Encuentro, which unites the music of these two cultures.   Joining Reginald will be the Cuban virtuoso pianist Alfredo Falcone in three very special performances in Havana, in Santiago de Cuba (which has a very strong Haitian cultural influence) and at the famed Port Au Prince PAP Jazz Festival.  Sammy is expecting this to be a life-changing and musically uplifting experience along with an opportunity to meet his wonderful friends on the island of Cuba.

SAMMY FIGUEROA IS A RECIPIENT THE JAZZ ROAD TOURING GRANT!

Sammy Figueroa is honored to have received one of the first touring grants from SouthArts Alliance.  These grants are part of a $16 million bequest by the Doris Duke Foundation and the Andrew Mellon Foundation to support jazz in the United States.  This grant made it possible for Sammy to tour the Midwest in October, presenting three performances and two master class/workshops.  Sammy and his band of virtuosos, the Latin Jazz Explosion performed at Chicago's Old Town School of Folk Music, Cleveland's iconic Nighttown and the superb new jazz club in Ann Arbor Michigan, the Blue Llama.  Sammy is proud to be a part of a community of emerging artists who were honored with this grant and look forward to mentoring younger musicians along the path.

Sammy Figueroa's highly praised radio show SOCIAL MUSIC has been discontinued for now by WBAI NYC, despite hundreds of emails and phone calls requesting that the show be restored.  As they say, when one door closes another opens.  Sammy has had several terrestrial radio stations throughout the country interested in Social Music but for now Sammy just wants to make sure that he can keep sending his listeners this great music on a weekly basis.  We welcome everyone to stream SOCIAL MUSIC with SAMMY FIGUEROA and keep supporting great radio.

SOCIAL MUSIC WITH SAMMY FIGUEROA TO BE RESCHEDULED BY WBAI

Sammy Figueroa's ground-breaking radio show, Social Music with Sammy Figueroa will be moved from its morning position to an evening slot.  For now, the show is off the air but Sammy's fresh mix of r & b, rap, Jazz, Latin and world music and his interesting commentaries on various subjects shall soon be back on the airwaves.  In the months that it has aired the show has gained many fans and has presented interviews with some fascinating characters: Arturo O'Farrill, Robert Battle of Alvin Ailey Dance Company, Michael League of Snarky Puppy and GroundUp Records, drummer Will Calhoun, Brazilian guitarist Chico Pinero and others.  Upcoming interviews will include the Grammy-winning drummer and educator Bobby Sanabria.  Stay tuned for Social Music's new time slot.

Sammy Figueroa is adding a new show to his radio repertoire:  every Tuesday from 10 AM to 12 noon on the legendary New York City radio station WBAI 99.5 FM.  Known for his warm radio voice and his amazing taste in finding the most special music in many genres, Sammy now brings these gifts to New York listeners.  After three weeks the show is already popular with many listeners calling in and will continue to become more so as word gets around.  Dedicated to Miles Davis, who first declared 'it's not jazz, it's social music', this show has something for everyone.  Come join Sammy every Tuesday on www.wbai.org streaming worldwide or 99.5 FM on your New York radio dial.

On March 23rd 2018 Sammy Figueroa performed an historic concert with Brazilian supserstar Joyce Moreno and one of the world's greatest guitarists, Brazilian artist Chico Pinheiro.  Joyce Moreno has recorded over 40 albums and has composed songs for multiple Brazilian artists from Milton Nascimiento to Caetana Veloso.  In rehearsal and onstage she was a simple, unassuming and totally musical presence.   Sammy has been interested in the music of Brazil for many years and has played with Jorge Ben Jor, Daniela Mercury and Tania Maria.  This concert was the beginning of a new collaboration between Chico Pinheiro and Sammy.  They are already in discussion about making an new album together.

On February 11th, 2018 Sammy Figueroa performed in Miami Beach  with Buena Vista Social Club legend Eliades Ochoa as part of the GroundUP Music Fest in Miami Beach.    Although Sammy has long been known as a player of sophisticated jazz and as a sideman to superstars in this show Sammy had the opportunity to honor his roots, playing old-fashioned son from Santiago de Cuba in the most traditional of styles.

Joining Sammy and Eliades was tres player Jose Elias and his group Cortadito, who are themselves masters of the old-fashioned son montuno and nengon styles.  The audience response was ecstatic and many said that it was their favorite moment in the festival

Sammy is honored to have Brazilian singer/songwriter Joyce Moreno join him on Saturday March 10th for a program entitled "Latin Jazz Meets Brazilian Song" at the beautiful Banyan Bowl in Pinecrest Gardens. Joining them will be the spectacular Brazilian guitarist Chico Pinheiro and the well-known Brazilian percussionist Cafe Da Silva. They will be presenting music by Joyce, by Chico Pinheiro and from Sammy's album 'Talisman' recorded with Glaucia Nasser.

SAMMY FIGUEROA BRINGS JAZZ TO THE FAENA THEATRE IN SPRING 2018

This series originally began in September 2017 with the great young jazz vocalist Jazzmeia Horn but was cancelled due to Hurricane Irma and its subsequent damage to the theatre. Sammy, who will also m.c. the shows, is looking forward to returning to this luminous venue.

The Faena Hotel, which opened in 2015, is the hottest and most glamorous place in town. More than a hotel, the Faena District includes Faena Park, Faena Forum and Faena Bazaar. The hotel lobby, designed by Baz Luhrmannn, showcases art by Jeff Koons and Damien HIrst.

Inspired by Europe's grand opera houses and the glittering allure of Old Hollywood, the intimate gilded Faena Theatre provides a perfect venue for intimate showcases of jazz and dance artists. Please join Sammy if your are in town for this series of very special evenings.

Sammy Figueroa is proud to announce that his latest album, "Imaginary World" his received Cuba's highest musical honor, the Premio Cubadisco. Often called "Cuba's Grammy" this prize honors albums that represent the best in many genres, in this case, International Jazz Album.

Produced by Rachel Faro and Ray Chew, with additional production and most of the compositions and arrangements by Silvano Monasterios and Gabriel Vivas, this album was released by Savant Records and has received much critical acclaim.

Sammy's relationship with Cuba and its music goes back to his first visit in 1990 with his partner Rachel Faro. Subsequent trips led to album productions with the a cappella group Vocal Sampling and the astonishing jazz group Cuarto Espacio. Sammy is planning to record his next album in Cuba, maximizing these musical relationships that go back a long way.